Mr.Bai was shortlisted for the China-France Cooperation Innovation Awards Final of the French-Chinese Committee
2018-12-26

According to People's Network Paris on December 6th, the Fifth China-France Team Cooperation Innovation Award of the French-Chinese Committee was announced in Paris on December 4. In 2018, the jury selected three Chinese and French multinational teams to reward their innovative solutions in environmental protection, transportation, health, industrial applications and smart cities.

The first prize of this innovative R&D award was awarded to two Chinese and French teams which includes the intelligent charging system jointly developed by French accessory supplier Valeo and Chinese startup XCHARGE, and the superheated dewatering solution based on hydrothermal carbonization of sludge by Suez Water and the municipal drainage management department.

The Innovation Product Awards award a product that has a special contribution to public health: the Chinese custom drug sensitive card (BIOMERIEUX).

The Innovation First Award was awarded to the French Dream Town/French City Brain Project in Hangzhou.

The Innovation Initiative Award F2 project is organized by the French Science and Technology Overseas Center in China which aims to gather a new generation of young talents in science and technology and explore the future development trend of Sino-French science and technology innovation and the direction of cooperation (in Paris and Beijing) to promote innovation and bilateral Cooperation. In 2018, 40 (20 Chinese and 20 French) elites under the age of 40 were selected for exchanges and discussions.

Bai Hongliang, founder and CEO of Beijing FaceAll Technology, was shortlisted for the final of the French-Chinese Cooperation Innovation Award F2 project of the French-Chinese Committee. At the same time, the finalists of the Chinese team were also the CEO of Aitian Education Technology, the French RIEIA researcher Shi Miaojing, the vice president of the Innovation Workshop Artificial Intelligence Engineering Institute Wu Zhuohao, and the French team candidate HOMMANO R&D Director Amélie Cordier, SALESFORCE Product Manager Thierry Donneau- Golencer, CEO of DREAMQUARK Nicolas Meric, Director of R&D, XBRAIN, Grégory Renard. The artificial intelligence projects that entered the finalists involved educational speech recognition and adaptive language learning techniques, customer relationship management, image processing and understanding, insurance and medical data. The final result of the F2 project award will be announced after the Beijing seminar in 2019. The Chinese and French teams will each receive an elite representative in the field of artificial intelligence. 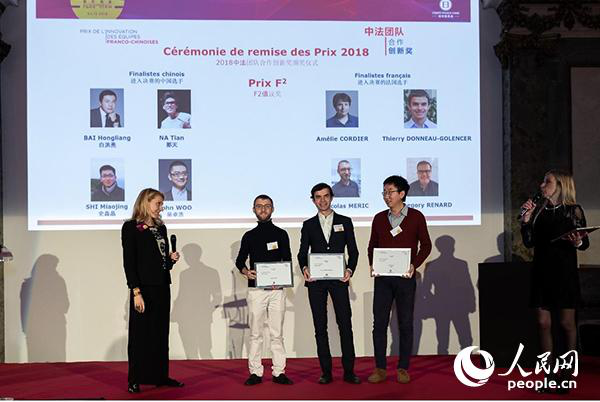 Chinese and French team representatives in the finals of the F2 Project of the Innovation Award are awarded the certificate of entrance.

The final results of the F2 project award will be announced at the end of the Beijing Symposium in 2019. The Chinese and French teams will each have an elite representative in the field of artificial intelligence to win the award.

The youth science and technology talents in the field of Chinese and French artificial intelligence in the F2 project gathered in Paris at the end of October 2018 to discuss innovation & entrepreneurship and explore the future development trend and cooperation direction of Sino-French scientific and technological innovation. During the visit, they visited the French Institute of Advanced Science (IHES), which has been sponsored by the Institute in 1958. Among the ten tenth-day professors in mathematics, there are seven Fields winners. They participated in the third "France is AI" artificial intelligence conference in Paris, with corporate executives, investors, entrepreneurs and researchers in the field of artificial intelligence from France, the United States, Canada, the United Kingdom, Switzerland, Finland and other countries. The staff and others conducted a two-day discussion and exchange. Seven representatives of the F2 project from the Chinese and French teams also made keynote speeches and interviews with the guests. The following picture shows Hongliang Bai, CEO of FaceAll interviewed at the Artificial Intelligence Conference on the company's founding development, technological advantages and product development. 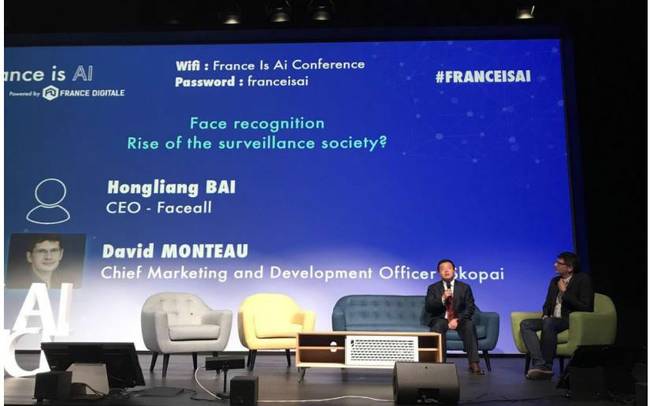